I read with interest, on the Cambodian Children’s Fund (CCF)  Facebook page, of the humanitarian award to be ‘gifted’ to Scott Neeson in June. 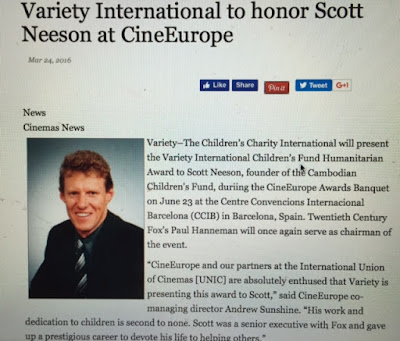 I wonder if you are as well informed about CCF as you should be? Given that you are also in the marketing business, perhaps you should take Scott Neeson and his public relations pronouncements with a grain of salt!

I believe that there are some questions you and Twentieth Century Fox should ask before providing  Scott with photo opportunities that create the impression that you and Twentieth Century Fox are endorsing CCF. Scott is a master of the photo opportunity (see photos of Scott and the Dalia Lama and famous Hollywood actresses) and will milk his ‘award’ on his Facebook page and in his press releases (which will be dutifully published by the Cambodian print media) to guarantee and sponsors and donors open their wallets and keep the dollars flowing into CCF bank accounts.

Here are a few facts about CCF that Scott Neeson hides as well as he can but which are available, on the internet, to anyone who decides to do a little research.

I would strongly recommend that someone within Twentieth Century Fox do a little research to find out who plays fast and loose with the truth – Scott or me!

Since 2010 CCF has taken in $36 million dollars in sponsorships and donations.

Some simple mathematics will reveal to you the kinds of questions you need to ask.

CCF is, according to its own publicity, taking care of 2,700 children. Most of these children live with their families, but leave this fact to one side for the moment.

The observation could be made:

Fair enough. Taking this into account simple mathematics reveals that CCF is ‘only’ spending:

And what is the per capita income in Cambodia? A little more than half of this sum.

“Is this, Paul,  a financially efficient way to assist children from impoverished families?”

Some more mathematics, this time applied to CCF salaries.

CCF’s staff salary bill for 2014 was $3.7 million. This was for a program that was, purportedly, taking care of 2700 young boys and girls – most living with their families and attending public schools.

CCF is paying more per child in staff salaries than, on average, the child’s entire family earns in a year.

Leaving aside the damage done to children by institutional care, does this removal of children from their families make economic sense?

I raised some questions similar to this in Feb 2015 on my blog entitled:

# 96 A message for Heather Graham re the Cambodian Children's Fund

“CCF is a registered charity in the United States. Each year the NGO must file a tax return.

The Cambodian Children’s Fund 2013 “Return of Organization Exempt from Income Tax” is to be found at:

In Line 4a the figure of $1,603,309 appears alongside a list of educational programs servicing 760 kids.

Simple mathematics reveals that CCF claims to be spending roughly $2,000 per child per annum for education.

Does this figure seem realistic, Heather, in a country in which the per capita income of most Cambodian families is below $1,500?

CCF claims to be spending roughly $2,000 per child for housing and transportation per annum and yet these children sleep in dormitories, often 3 and 4 to a bed!

Given that the cost of transportation within Steung Meanchey would cost very little, it is fair to assume that the bulk of the $2,000 CCF claims to spend per child in institutional care is for ‘housing’.

How and why does it cost more to house and educate one Cambodian child in a CCF institution for one year than it costs for an entire Cambodian family to live for one year?”

I do not expect you, Paul, to accept that my mathematics is correct. However, I do think that someone within Twentieth Century Fox should set aside an hour or so to do some basic internet research to determine whether or not I have my facts right.

Your researcher will find, if s/he asks the right questions that a very high proportion of these families wind up working in the Phnom Penh rubbish dump because they have lost their homes and land as a result of debts accrued through family illness or some other financial disaster they were ill equipped to deal with.

I know from experience that for many of these families the sum of $5,000 will enable them to buy land and a modest home back in the provinces they come from and become, as they were before financial disaster struck, self-sufficient. Divide $36 million by $5,000 and you get 7,200.

So, 7,200 families could have been provided with $5,000 to buy land, a house or to set up a business that would make them self-sufficient. Or 3,600 families with $10,000 to get them on their feet – either in the provinces or through setting up their own businesses in a Cambodian city.

Again, the question arises, is the money provided to CCF by donors and sponsors being used efficiently?

Paul, in the interests of transparency and accountability you might like to ask Scott Neeson to explain how and why it is that salaries for CCF staff more than doubled over a period of two years?

In 2014 CCF had a little under $5m in land and 3.5 million in investments. This, at the same time that CCF was locking families out of their homes for being less than $20 behind in their rent! See:

Questions abound. See my most recent blog entry for some of these:

Before being a party to awarding Scott Neeson with a humanitarian award you might like to ask Scott who is the owner of the land upon which World Housing homes are constructed?

Does this lie of Scott Neeson’s, and others that can be discovered with a little research, bother you at all, Paul?

I know, from doing my research, that bought in bulk, each of these pre-fabricated houses costs $1,000 to manufacture. Allowing for, say, $200 per house in construction costs, the owner of the land upon which they have been erected is now the owner of 360 houses valued at $1,200 at the very least. That’s $432,000 of houses now owned by whoever owns the land. 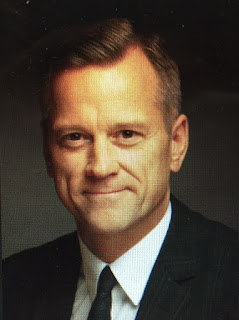 Please, Paul, ask Scott who owns the land and so is the beneficiary of this financial windfall. Does Scott Neeson own the land? Does Kram Sok Channoeurn, Country Manager? Surely, the owner of $432,000 worth of housing, ‘gifted’ to him or her (instead of to poor families) should be made known to donors and sponsors who will be impressed by the humanitarian award being given to Scott in June!? Will their money, through sleight of hand, go towards enriching private individuals and not towards the poor families for whom it is intended?

Lending your name and that of Twentieth Century Fox to a worthwhile project is both understandable and commendable. However, you must also be aware that Cambodia has not acquired the epithet ‘Scambodia’ by chance.

Take what I write here with the same grain of salt that I hope you take whatever Scott tells you. Ask some questions, Paul. You are experienced enough in the world of pubic relations to know that when it comes to selling a product (as when starting a war) ‘truth’ is the first casualty.

Posted by James Ricketson at 2:47 AM 99 comments: Links to this post