# 198 Scott Neeson is a liar and a thief. His Cambodian Children’s Fund is, on so many levels, a fraud.

Scott Neeson is a liar and a thief. His Cambodian Children’s Fund  is, on so many levels, a fraud.

A bold statement and one that should not be taken at face value by any potential sponsors or donors who might be reading this.

Take what I write here with a grain of salt. Take what Scott Neeson writes with a grain of salt. Be sceptical and ever-vigilant for spin and lies – either my own of Neeson’s. Work on the presumption that we both have our different agendas and let facts be your guide. Where you cannot be sure what is a fact and what is a presumption, opinion or prejudice, ask. Ask Scott Neeson. Ask me. Ask someone who has worked at the Cambodian Children’s Fund.

Check out the following blog entries. Double check online to see if I have played fast and loose with the truth. If you find that anything I write is not supported by what you read, let me know; challenge me. Call me a liar by all means if you have the facts to back this up. I mention this because this blog attracts some Trolls for whom facts, evidence and truth are irrelevant:

If you read what I have written about World Housing (and there is more if you are interested) and wonder why Scott Neeson said that CCF was ‘gifting’ houses to poor Cambodian families when he was, in fact, ‘gifting’ them to the owner of the land upon which they were built, ask him why he lied.

If you wish to give him the benefit of the doubt, ask him if he can explain the discrepancy between what what he said about the ‘gifting’ of homes and the fact that no ‘gifting’ has taken place.  Ask him if can please tell you who is the owner of the land upon which the houses have been build and so the recipient of between $500,000 and $1 million worth of free housing?

Scott Neeson does not like to be asked such questions and goes out of his way to be uncontactable. He is allergic to journalists other than those he can rest assured will ask him no questions but publish whatever press release he presents them with. You could, however, ask Scott Neeson questions via the generic Cambodian Children’s Fund contact email address:

If you do not receive any reply at all, or if you receive a reply that seems to be evasive, draw your own conclusions.

If you arrive at the same conclusions I have arrived at (based on facts and not on spin or lies) you will agree that Scott Neeson has defrauded the sponsors and donors who gave their money in good faith, believing they were giving houses to poor families. He has stolen 360 homes intended for poor families. He is  thief.

If you want to support a liar and a thief, go ahead.

Within hours, perhaps minutes, comments will appear on this blog entry from people whom I refer to as Team Neeson. These are anonymous commentators who see their role not as the answering of questions such as the ones I am posing here but in shooting the messenger who asks the questions. This can be tiresome at times and quite entertaining at others.
Posted by James Ricketson at 2:40 AM 166 comments: Links to this post 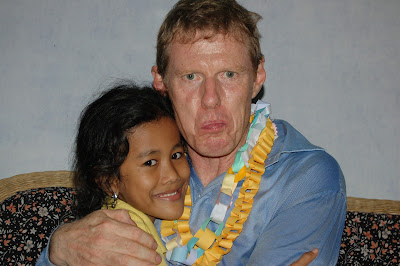 You want to hear what people think of the Cambodian Children's Fund, right?


An opportunity too good to pass up, though I imagine that you will have the results of your survey already. 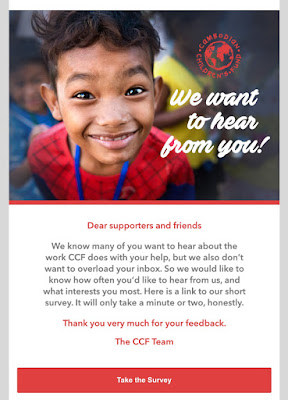 The report you write for yourself, for CCF (based on feedback of course!) will be glowing. 90 something percent will think yours is the best in Cambodia (maybe even in the world!) You will get 90 something percept for transparency and accountability and, no doubt, you'll be able to organize for someone to give you another award; wrap another red sash around your shoulders. And you’ll find some hack journalist to write a hagiographic piece about how you gave up your life in Hollywood to come to Cambodia to save the children etc. and then post it on Facebook as if it is real journalism.

In one respect, Scott, you are totally transparent. Blind Freddy can see that you are a fraud. 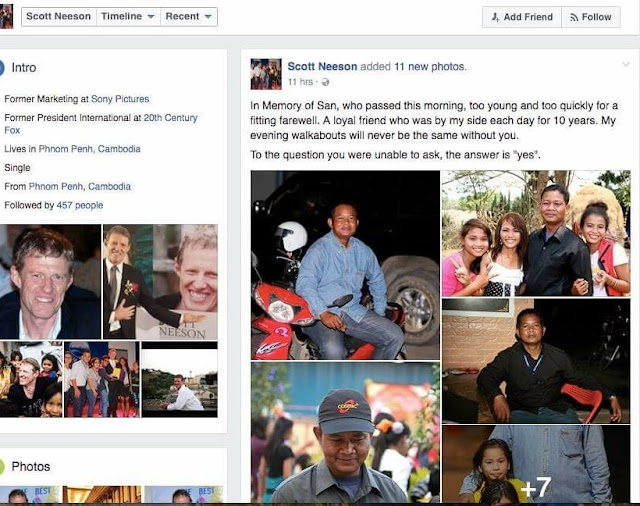 This page is no longer online. You took it down. For those reading this, who saw the post and wonder why it was taken down, here's the reason.

A few years ago this CCF girl died whilst in your care. Her name was Nget Kim Loat. CCF decided to hush up her death. As far as the world knew, Nget Kim Loat was not in CCF residential care.

I wrote the following to Bob Tufts, one of CCF’s board members, on 26th September 2015

As you know, Scott Neeson refuses, as a matter of policy, to answer any questions.

The Cambodian Children’s Fund likewise refuses to answer any questions.

I will, nonetheless, put some questions to you and have them on record:

Did CCF know that a child resident at CCF suffered from a readily treatable condition by the name of Nephrotic syndrome?

Did CCF provide this young girl with appropriate treatment for her condition? This includes medication and the special diet required by her illness?

Did a nurse at CCF refuse to act appropriately when this girl complained of fainting and other symptoms associated with her condition?

When alerted to the graveness of this girl’s illness, did CCF respond with appropriate speed to her need to be transported by ambulance to hospital?

After the girl died, did CCF refuse to allow her friends to attend her funeral?

I received no response from Bob or from any other member of the CCF board whom I notified about the death of Nget Kim Loat. The board had no interest; just as the board has shown no interest in any of the multiple Neeson/CCF scams pointed out to them this past couple of years. From a moral point of view, from a legal point of view, the CCF board is complicit in your breaches of the legal and human rights of both the children in your care and of the families you force to sign illegal contracts.

Nget Kim Loat died as as a result of CCF incompetence. And then, to add insult to injury, you refused to allow her fellow CCF students to attend her funeral.

One friend of Nget Kim Loat’s kicked up a fuss about not only the way in which she had died but the CCF cover up. James Mc Cabe let this student know, in no uncertain terms, that if s/he were to say anything about the girl's death in public he would sic the Cambodian police onto him/her. A few days later this student was expelled. This is the way CCF deals with problems - threaten and intimidate into silence the person who may make the problem public.

When this student commented on your post about the death of your bodyguard (one of three!), linking it to the death of Nget Kim Loat, you took it down post haste.


Now what about Alan Lemon and the Oasis Bar - a girlie bar owned by his former de facto wife; a bar that Lemon ran, with his de facto, before falling foul of the Australian Federal Police through aiding and abetting James Mc Cabe when he was on the run from the AFP. 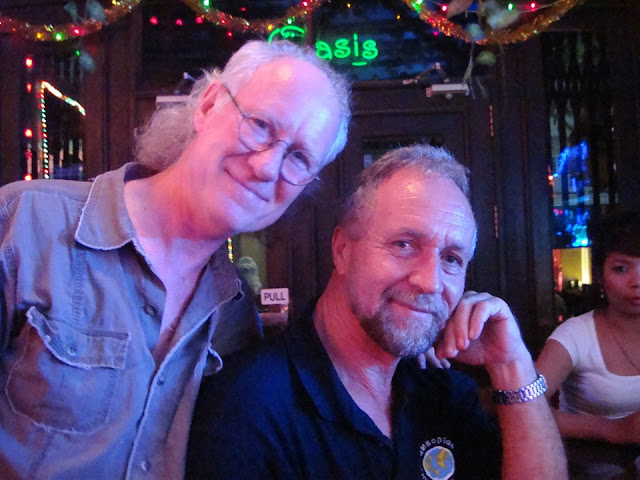 Now of course, there is nothing wrong (at least not illegal) about a middle aged man visiting a girlie bar. But really, Scott, this is not a good look for a man who co-runs a Child Protection Unit - to be frequenting a girlie bar wearing his CCF t-shirt!

Or do you think this is OK?

“Phnom Penh is a giant red light district, with go-go or ‘hostess’ girly bars the most public example of Cambodian sex tourism…There is no centralized red light district in Phnom Penh, but the area around Street 130, Street 136 and Street 51 is where the majority of bar girls can be found, at any time of the day or night. Most of the ‘bars’ are little more than brothels with beer…We walked into (the Oasis Bar), unknowing that it was a hooker bar. And as soon as we entered the door we were hounded by girls who were absolutely barkin. Lots of old men come in to pick up some cheap Cambodian girls and is a very unpleasant place to be.”

Let’s end this latest episode of “This is Your Life, Scott Neeson” with a couple more photos taken from inside one of your facilities. 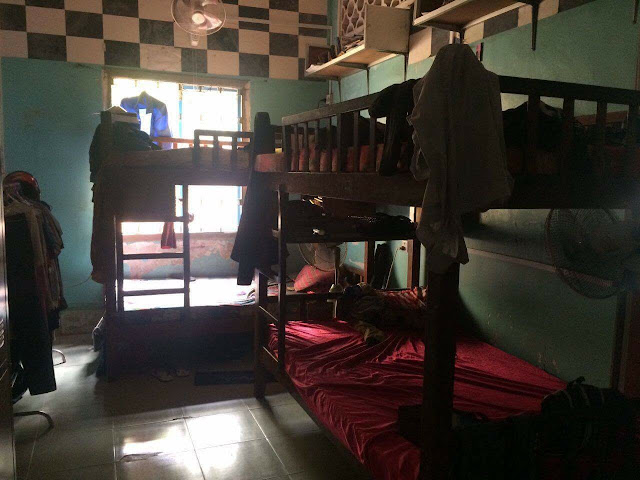 The beds look pretty good, I must say – though they would be a bit cramped with 3 or 4 kids sleeping in each bed. Still, this problem is easing now that you are kicking out so many kids to make ends meet financially. As for the bathroom, it looks as though the sink needs cleaning but it’s OK. 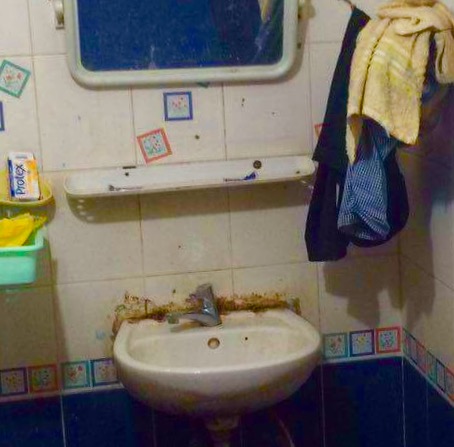 My reason for publishing these photos (no photos with kids in them, note) is to let you know what you know already – namely that I have my own spies within CCF. As you may or may not be aware you are not much liked by your staff. Feared, yes, but not liked. They feel intimidated by your non-disclosure contracts; knowing full well the dire consequences for them if they speak to the media or to anyone else about what they know.

So, Scott, do your survey, publish the results and, with a bit of luck, there will still be some suckers out there who believe the spin you generate about yourself and who will open their wallets.

Until next time.
Posted by James Ricketson at 3:24 AM 146 comments: Links to this post