# 201 TORTURE IN PJ PRISON? A request to the Minister of Justice to investigate 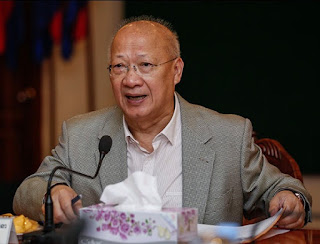 I wrote to you regarding torture being practiced at PJ Prison on  29th April 2016.

It would appear that the torture of prisoners continues - in contravention of both Cambodian and International law.

Over the past six months I have heard many stories of torture occurring within PJ prison – from both prisoners and guards.

1.     I believe that the following allegations, made by prisoners and guards, should be investigated:
2.     The Director, known by prisoners and guards alike as ‘Pol Pot’ forces offenders (who break his new prison rules) to kneel on hot concrete, holding their hands in a praying gesture to him as ‘Pol Pot’ stands over them with a long stick.
3.     One offender kneeling on the hot concrete has been seen sobbing as he begged ‘Pol Pot’ for forgiveness.
4.     Another offender has been seen by prisoners and guards alike handcuffed to a flagpole in hot sun without clothes on other than underpants.
5.     A woman prisoner died in PJ prison last week. ‘Pol Pot’s’ comment: “I expect prisoners to die.”
6.     Female prisoners have been told by Pol Pot that he has secret cameras in their rooms. Their shower curtains have recently been lowered ‘by order’.
7.     Female prisoners put in ‘the hole’ (a hot enclosed space used for punishment) have been threatened they will have all their hair cut off.
8.     Four female prisoners have recently had their hair cut off as punishment.
9.     Prisoners are allowed less and less time out of their cells now. Some days the are not allowed out for 36 hours, and then only for a short time.
10.  ‘Pol Pot’ has forbidden visitors from bringing in fruit for prisoners. This is to force the prisoners to buy from prison.
11.  ‘Pol Pot’ is now charging prisoners  $25 a month to cook your own food. And prisoners must pay $50 a month if they want to go outside on both breaks.
12.  Most prisoners are getting only 35 minutes a day out of cell.
13.  Most prisoners sleep sideways because there is not enough room for them to sleep flat.

These allegations come from multiple sources. If confirmed by an investigation by the Ministry of Justice I believe that the Director of PJ Prison (‘Pol Pot’) should be removed from his position and replaced by a man who does not have sadistic tendencies; who does not exploit prisoners for his own financial gain.

‘Pol Pot’ does not only practice physical torture. He also practices emotional torture.

On 28th Feb I wrote to you regarding Wu Chia Hsun – a young Taiwanese woman who has been in PJ prison since she was 16. She has no family or friends in Cambodia. I have visited her several times, giving her magazines in Mandarin and fruit. ‘Pol Pot’ has decreed that I can no longer visit Wu Chia Hsun because I am not a member of her family.

What kind of human being would punish a young woman in this way; denying her visits from the only person who has visited her in the past nine years?

re Torture at PJ Prison

This morning, on a visit to a prisoner in PJ, I witnessed a prisoner being tortured.

The man, from Taiwan, was being forced to sit in the hot sun, with no hat and with his hands in cuffs behind his back, in the middle of the cement courtyard. He was in plain viewer to all prisoners not in their cells, to a dozen or so guards and to visitors such as myself.

Since the new Governor took over at  PJ I have receive many such reports of torture from prisoners. There is an area, in ‘Reception’, underneath a suitcase, that has been enclosed in tin and into which prisoners are placed – at times for up to a week – with no toilet facilities and without drinking water. They are let out, I am told, once a day to use the toilet. There is also no light in this hot tin box.

According to the reports I have heard this past few days some female prisoners have collapsed as a result of severe dehydration and had to be carried from this ‘sweat box’.

This constitutes ‘torture’, which is specifically banned by the Cambodian Constitution:

….The law prohibits all physical abuse of any individual….

The coercion, physical ill-treatment or any other mistreatment which imposes additional punishment on a detainee or prisoner is prohibited. Persons who commit, participate in or conspire in such acts shall be punished according to the law.

Minister, I believe that an immediate investigation needs to take place into these illegal acts of torture at PJ prison and that the Governor should be sacked from his job for ordering such punishments to occur.

No doubt the Governor will insist that no torture takes place in his prison. However, well over 100 people witnessed what I saw less than an hour ago – a Taiwanese man, in the hot sun, without a hat and with his hands cuffed behind his back, sitting on concrete in the PJ ‘Recreation’ area..

During my visits to Mr David Fletcher in PJ prison I have met a young woman by the name of Wu Chia Hsun. She has been in jail since 2007, since  she was 16, for trafficking drugs.

Wu Chia Hsun was very young, very naive and acting on the orders of her father when she smuggled the drugs back in 2007.

In January this year she wrote a letter to the King but could not have it delivered to his office as she did not have the money to make the payment requested by those who were in a position to deliver it. Please read Wu Chia Hsun’s letter:

My name is Wu Chia Hsun. I come from Taiwan. I was born in 1991, May 3rd. I’m 25 years old. Im in PJ prison. My parents separated when I was 6 years old, and I moved to live with my granny in th4e country side.

My case number is 2093. My case is international drug trafficking. The date I was imprisoned was 2007, December 7th. The court sentenced me to 12 years. I was only 16 years old when I entered prison. I’ve been inside the prison for 8 years and one month without any family visits. And my sentence was reduced by 9 months during the Water Festival of year 2015. Now I still have 3 years and 2 months. I’ve already served 2/3 of my sentence.

Dear respected and kind King, I apologise for what I did! It’s a big mistake! I’m really sorry! I was too young. I was just trying to help my family. My family is very poor, and I’ve a bad father. He had a lot of credit money.  But if I had known the severity and serious consequences of what I was asked to do, I would not have done it. I was beknighted to believe a bad person. Because of my innocence I was incapable of accomplishing my own studies. I missed my important younger years and the destruction of my innocence.

Dear benevolent King, please forgive me, and please forgive my rudeness in requesting your help. Please help me be reunited earlier with my family and be obedient to my old granny and mammy. Please, I don’t have money for communication pardon I’m helpless. I feel helpless. I’m suffering here. I miss my family so much! I really want to go home! Please, I beg you dear respected and kind King. I promise I’ll always be a good girl. And I’ll always keep a kind heart! Thank you very much! I’m really appreciate your help.

From your truly and little poor girl
2016 January 21st

If you were to send a representative of your Ministry to PJ prison, Mr Ang Vong Vathana , to speak with Wu Chia Hsun she (or he) would find that despite her now being 25 she is still the same very innocent girl who was doing as she was told by her father – in an attempt to pay off her father’s debts and lift her family out of extreme poverty.  Some discrete questioning about the circumstances surrounding Wu Chia Hsun agreeing to her father’s demand that she smuggle drugs would reveal information that she does not want to divulge in public. Shew does not wish to bring shame on her family. This information would go some way to explaining why she felt compelled to obey her father’s demand that she smuggle the drugs.

Yes, Wu Chia Hsun committed a crime in 2007 but is there any purpose to be served in keeping her in jail any longer? I believe, if someone from your ministry spoke with her, that they would realize she is not a criminal but merely a young girl who made a mistake and that she deserves to be released and allowed to re-start her life.