# 202 Some questions for Samuel Robinson, CCF Board member

You are a member of the Cambodian Children’s Fund board.

One of your jobs, as board member, is to see to it that Scott Neeson, as Executive Director of CCF, lives up to Charity Navigator’s 100% rating when it comes to Accountability and Transparency.

You are well equipped to do so, having worked for 18 years for Goldman Sachs in a variety of senior positions. You know how to read and assess Financial Statements; to know whether they reveal or conceal how money is being spent.

Take the following chart, for instance, published on CCF’s website: 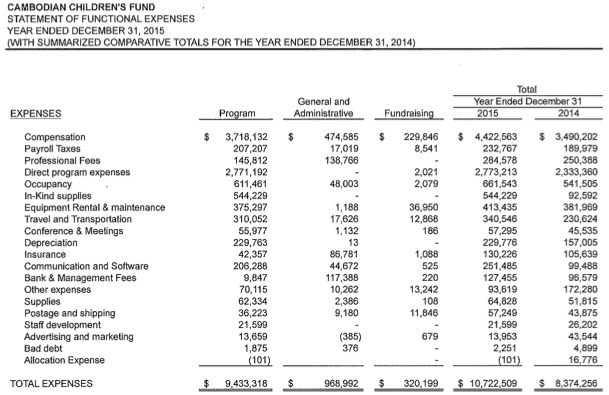 I am not adept at reading Financial Statements and I suspect that this may be the case for many donors and sponsors to CCF who wish to know their contributions are being spent.

Perhaps you can help us?

Does the expense item “Compensation” refer to salaries paid to CCF personnel?

It appears that this is the case to me, but perhaps I am mistaken?

Could you please clarify? Yes or no?

If I am not mistaken, the following can be made as a statement of fact:

To put it another way, more than one third of the NGO’s total annual income was spent on salaries. This is for a programme that claims to be looking after 2700 disadvantaged youngsters - most of whom live at home. (Only around 560 are in residential care).

CCF pays, on average, a $1,370 per annum salary to care for one disadvantaged child!

$1,370 is more than it would cost to support that one child’s entire family for a year.

Is this an efficient use of donor and sponsor money?

If I am making some fundamental mathematical error here please correct me, Samuel.

If CCF’s Charity Navigator 100% transparency and accountability rating bears any relationship to reality you will correct any mathematical or other errors I am making here! 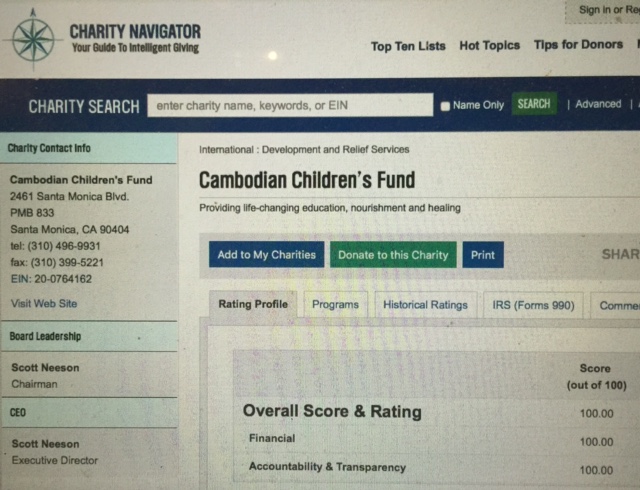 Given that only around 560 disadvantaged children are in residential care (despite most of them having families!) the application of some more mathematics is in order.

How many of CCF’s 2,700 students are receiving an education paid for by CCF?

It is impossible to figure this out from looking at CCF financial statements! Why are figures such as this not made known to sponsors and donors?

How much do Khmer teachers earn? (Again, why not include such figures in CCF’s Financial Statements?)

How much do James Mc Cabe and Alan Lemon earn?

Let’s work on the presumption that they earn around the same as Scott Neeson.

There now remain around $3.2 million of wages yet to be accounted for.

Please feel free, Samuel, to correct me at any point where my mathematics is flawed.

Let me take a wild guess here. With roughly 560 kids in residential care, let say there is one Khmer staff member for every 5 kids. This gives us a total of around 100 Khmer staff.

Let’s call it $200,000 and subtract it from what remains of CCF’s salary bill as yet unaccounted for - $3 million.

I am quite prepared to stand corrected if my mathematics is wrong (maths has never been a forte of mine) and would ask you to do so if I have made errors here.

If my maths is not too far wrong, I would like to ask you, Samuel, on behalf of CCF sponsors and donors , in your capacity as a board member of CCF, and with your 18 years of experience with Goldman Sachs, to account for CCF’s $3.7 million annual salary bill.

And what about the $2.7 million spent on 'Direct Program Expenses'?

Would you be so kind as to provide CCF sponsors and donors with a breakdown of how this $2.7 million is being spent? 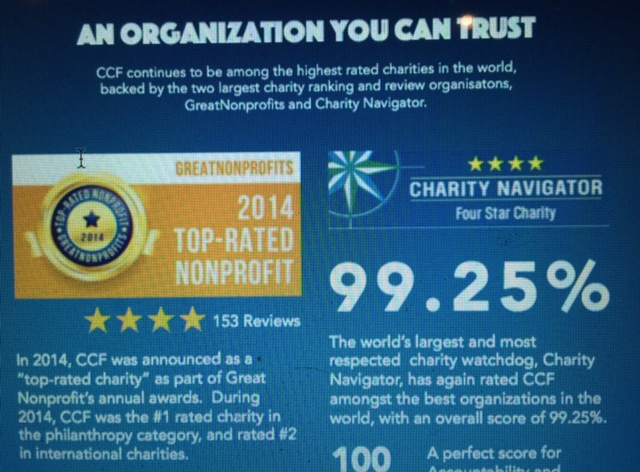 Posted by James Ricketson at 3:34 AM